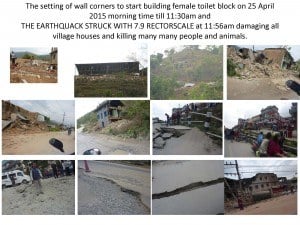 Bishnu and the project construction team had been working at the new project site at the Jalapadevi School in Bahuneapati when the quake struck on 25 April.  He has sent through a detailed photo report showing images of the site and construction works in progress up to 25 April, followed by images of the damage caused by the quake.

Several people were killed in the Bahunepati / Melamchi region though the exact numbers are not certain.  Six children from Jalapadevi school were killed and the project team has offered support to their families.  Healthabitat and TT will try to get to this site during their May visit to assess the damage, and to work with the school and teams to sort out priority works.  Re-establishment of employment is crucial in supporting the finances of those affected by the quake, and crucial for the whole Nepal community.